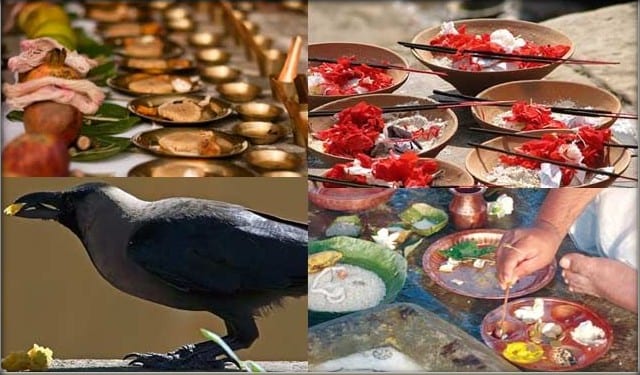 Note: This price applies only for online Puja  and Tarpana !

Pitru Puja :includes Tarpana ,and worship of ancestors up to the 12 generations from mother and father side Shastra recommends Pitru Tarpana .Even great acharyas did it . Since we touch topic of Tarpana let me mention that Tarpana should be also offered to the unintentionally or unconsciously killed animals by us.
When an individual is on the brink of death, the relatives should inform the Priest in order that priest can perform death rites, normally Ganga water is placed within the mouth of the departing person at time of death .
The Pitru Paksha puja commonly referred to as Pitru Puja is performed to the 12 generation of ancestors from both the Father’s and Mother’s side. The term ‘Pitru’ refers to the ancestors and therefore the Paksha is that the specific time when Hindus can perform Tarpana and food offerings for the ancestors. This ancient ritual has widespread significance in Hindu culture. Shastra recommends offering the food and water to Pitrus not only in Pitru paksha but at least once a month during Amavasya . Those who fail to perform the rituals are believed to remain without food and water in their afterlife.Our ancestors have left their love, blessings, properties and many other possessions that really shape the present and future giving more security and strength. The Pitru Puja (only done by the male members of the family) is sort of a Thanks giving procedure to point out respect and food offering to the ancestors for what they have left for the future generations and us.

Shradha Puja Ceremony benefit us in many ways.
Our own Pitrus become eager to bless us Vishva devas becomes pleased by accompanying the Pitrus Maha Vishnu protects our karma and provides us the great fruit Devas like Agni participate in our Homam Devatas in Svarga Loka become pleased with our Brahmana Bhojanam Ancestors who sleep in Naraka, who are unable to succeed in Pitruloka get satisfaction from special Pindadanam and Vikirannam (food which is spread in front of the leaf in which the Pitru Brahmana takes food)
Vayasapindam offerings of food to Crow brings satisfaction to unknown Pitrus.Pitrus who are in the form of Vasus, Rudras and Aadityas are capable of blessing the performer of Sraddham here on Earth. On the appointed day of Shraddham they visit the homes of the descendants and expect to receive offerings. If Shraddham is not performed properly, they get irritated. The irritation acts like a curse on the family resulting in loss of wealth, absence of progeny and many other miseries. You must perform Shraddha without the fail! Aadityapurana says that in the case of one who
does not perform Shraddha on the assumption that there are no Pitrus, his blood is drunk by the Pitrus. There is no reason to doubt whether the offerings of food etc. given during Shraddham reach in fact the Pitrus. Sage Vyasa clearly says that just as a calf which has lost its way identifies its mother cow in a crowd of several cows, in the same way the offerings given during Shraddham here are made to reach the respective Pitrus through Vedic mantras.The name and Gotra of the Pitrus are enough to reach the offerings to the Pitrus. In whichever birth the Pitrus may be, the food reaches them in a manner appropriate to that birth and pleases them immensely.The Pitru Paksha starts on the complete moon day (Purnima) before the start of the Durga Puja in Bengal. The duration (also called Mahalaya Paksha) of 16 days of this paksha ends on the no moon day (Amavasya) or the Mahalaya tithi when the Durga Puja begins. It is also believed that Hindus shouldn’t cut their hair during the Pitru Paksha. The period should also be avoided for doing any new work or beginning something important.
In Shastra, there’s a mention of performing Pitru Puja on every new phase of the moon day for all 12 months of the year. However, due to hectic schedules, this may not be possible for many people. The family priests therefore suggest performing the Tarpana puja by offering rice with sesame seeds and water a minimum on the religious holiday of Mahalaya Amavasya.

Nandi Shradham Puja Ceremony
Pitrus are full of love and compassion. They feel very happy on occasions of auspicious celebrations in the family. They come with auspicious materials and bless their descendants. Nandi refers to auspicious sound or material like pot
filled with water, etc. As the Pitrus bring auspicious articles, they are called Nandi mukhas. When they arrive, the eldest comes first followed by the other Pitrus in turn. Dharmashastra mentions that the Nandimukha Pitrus come on various auspicious occasions including Garbhaadhaanam, Pumsavanam, Seemantham, Jatakarma, Namakaranam, Annaprasanam,Choulam, Upanayanam, Vratham, Vivaham, Grihapravesham etc. It is therefore necessary to perform Nandi Sraaddham on these occasions, preferably as Aama Shraaddham. The Naandimukha Pitruscome accompanied by two Vishva devas called Satya and Vasu. Welcoming and extending
hospitality to them is Nandi Shraaddham. It is called Vriddhi Shraaddham as it aids in further growth of the family and Abhyudaya Shraaddham as it helps in material advancement of the family. While performing Nandi Shraaddham as Aama Shraaddham (rice and plantain offering),
it is usual to invoke 9 brahmanas .Normally a set of dhoti and angavastram is offered to each. Some people refrain from performing Nandi Shraaddham citing unacceptable reasons like ‘this has not been the practice in the family’, ‘once it has been performed for Upanayanam, it is not necessary to do it again on the occasion of Vivaham’ etc. This is not correct. Dharmashastram is
clear and should be followed.

Any cookies that may not be particularly necessary for the website to function and is used specifically to collect user personal data via analytics, ads, other embedded contents are termed as non-necessary cookies. It is mandatory to procure user consent prior to running these cookies on your website.